The difference between single core cable and multi core cable

2.A multi core cable is a cable with multiple mutually insulated conductors in the outer insulating protective layer of the cable.Multi core wires are generally three-core wires, because in the operation of the cable, the sum of the current flowing through the three cores is zero, and there is basically no induced voltage at both ends of the metal shielding layer of the cable. When the current is large, the required cable is thicker, and it is more suitable to use multi core cables. If single core cables are used, due to the skin effect, current only flows on their surface, and a lot of the central part is wasted. The internal current is relatively small, and the cable is not fully used, resulting in reduced utilization. The multi core cable can effectively reduce the impact of the skin effect. Considering the utilization rate, the multi core cable is more suitable. 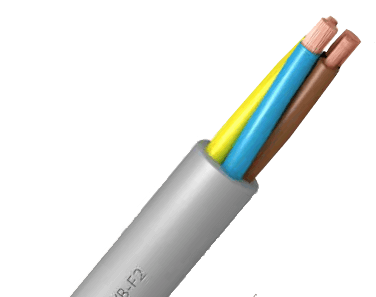 3. The difference between single-strand copper wire and multi-strand copper wire is mainly in its structure. Because multi-strand copper wire is soft and not easy to break the core, it is suitable for the curved tension movement of the wire in the installation of the tube. It is not easy to pull (unless it is a straight line); the price of plastic insulated wires of the same specification, multi-strand wire is higher than single-strand wire, one is that the process is complicated, and the other requires pure copper; In other words, it should be more convenient in terms of line joints and equipment wiring.
4. Multi-strand copper wires generally need to be crimped or welded with wire noses, especially household wire diameters within 4 square BVR multi-strand copper core wires, according to GB50303; construction quality acceptance specifications for electrical engineering; Article 18.2 stipulates that the cross-sectional area is within The multi-strand copper core wire terminal of about 2.5mm 2 should be tightened to the tin-lined or connected terminal and then connected to the terminal of the equipment and appliance.
5. The single core is strong and durable, and has good electrical conductivity; the single core wire is suitable for use in fixed places. For example, the single core wire in the wall is generally very hard, and it is easy to be broken by repeated bending. Generally, the single core is used, which is convenient for configuration and uses multiple cores. Laying through pipes is easier, but more wasteful.
6. The multi-core is flexible and easy to lay. For chandeliers and the like, it is best to use multi-cores and multi-cores for moving places. The price is cheap, and the cross-sectional area is small. It is easy to punch through the tube. Single core is generally used in engineering. In addition, there are fewer multi-core double-layer insulation.
7. The main difference between single core and multi-core is the flexibility of the wires. In fact, there is no question which is better between the two, but the environment of use is different. For example, if you want to use pipe wiring in a family room, it is obviously better to use a single core because the single core has a certain strength and is convenient to thread. , The joint connection is simple. However, there are many turns in the line, and a section of the line has many bends. Obviously, it is better to use multi-core, because multi-core has good flexibility and can be bent better without breaking; but multi-core wires have joints that are easy to contact The problem of bad and heat generation, so the joint should be handled properly when using it. Generally, use multi-core cables as much as possible because of low loss. If the current is very large, it is better to use double multi-core cables than single core cables. If single core cables must be used, pay attention to the three-core cables to be discharged in a trilobal shape when single core cables are laid.
8. The single core with the same cross-section can withstand higher current. The power cords of multi-core soft and other electrical equipment are all multi-core. Single core cables are generally used in power tools used in normal production activities: official use at home ——--BV plastic copper wire, TV, and vacuum cleaner that go through the inner wall pipe are all single core wires. Single core is stable and easy to operate. Electrical equipment generally uses multi-core cables or wires.

The advantage of the multi core cable

The specification of the single core cable(2)